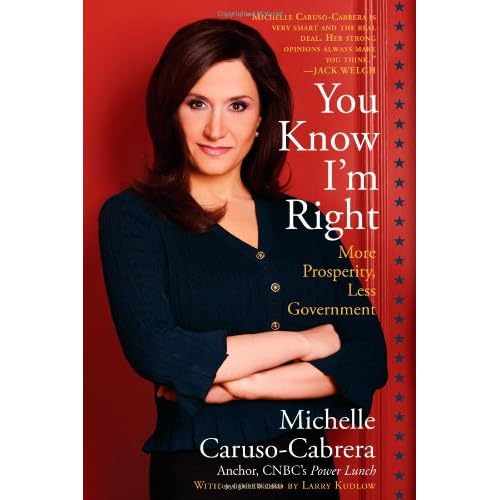 Michelle Caruso-Cabrera is an anchor and reporter for the network’s Business Day programming and is currently part of the “Power Lunch” (12PM-2PM ET) ensemble with Sue Herera and Tyler Mathisen.  The following is a candid interview that I hope you find interesting.

Question 1)  Clearly your Dad was a big influence on you, tell our readers about your Dad and how he influenced you?

My father is an engineer, and I can remember, even as a very young child hearing him talk about the stock market with my grandfather.  We had one of the first satellite dishes (back when they were HUGE) in our front yard so he could watch the ticker on FNN.  At the time, the scrolling TV ticker was a major technological advancement. Before that, you had to wait until the next day to read a stock price in the newspaper.  FNN is short for the Financial News Network, and is the precursor to CNBC.  Bill Griffeth, Sue Herera, and Ron Insana all worked there.  My father and my grandfather always invested in the stock market, and always watched CNBC.  They are key reasons why I am where I am.

Question 2) You did a fascinating interview with world’s richest man and one of my investing heroes Carlos Slim, as he was a board member of Altria and large investor. How did that influence you and your feelings about free market capitalism?

Carlos Slim is one of several billionaires I’ve interviewed. Haim Saban, Aubrey McClendon, Richard LeFrak, Ken Langone, Bernie Marcus, Ricardo Salinas are some of the others.  They all have many of the same qualities.  They are first and foremost excellent assessors of risk, and mentally, they can bear more of it than the average person.  (Though they don’t get it right all the time.)  When they look at balance sheets, certain things stand out to them, as if they were highlighted in bright yellow.  They are hungry; what I mean by that is no matter how old they get, they have a fire in the belly to ACHIEVE — not to get more money, but to create and to build.

Question 3) Tell our readers something few people know about you, that you wish they did?

I am on the board of Ballet Hispanico, the premier Latin dance troupe in the United States, founded by Tina Ramirez more than 30 years ago. We also have a school of dance on the upper West Side of New York, which teaches hundreds of children every year. Many of the students are subsidized by scholarships we raise from private donations. We have a wonderful new director, Eduardo Vilaro, who is bringing fresh energy and excitement.

Question 4)  What impressed me is how you speak of lowering taxes and are one of the few journalists who realize that the tax cuts by Kennedy, Reagan and Bush and the cap gain tax cut by Clinton actually RAISED revenues the following 2 years, not lowered them as some would like to believe. How much would you personally cut taxes and what are your feelings about capital gains and dividends?

First and foremost I think we need a much cleaner tax code. No deductions, or credits or blah blah blah for this, that, or the other thing. It gums up the code, makes it extremely complicated, and is mostly an effort by the government to pick winners and losers and do social engineering. I think a flat tax, or at least flatter tax system, is better, but recognize the reality of that is highly unlikely.

Question 5)  As the father of a young daughter, what advice would you give for a young woman who wanted to get into the financial news business?

Read a lot.  Exercise a lot.  Question all assumptions.

Question 6)  There is a rumor you are part Italian, any truth to that?

My father is Italian-American, my mother is Cuban, and now a US citizen.  She and my grandparents came in 1962 to escape Castro.

If you would like to learn more about Michelle’s thoughts and insights, I recommend that you read her new book titled “You Know I’m Right: More Prosperity, Less Government“

Despite being on the left leaning CNBC, Michelle Caruso Cabrera has written an informative yet common sense approach to a very common problem today. Folks like her and myself that are fiscally conservative but socially liberal.  Michelle explains how Reagan and his values changed her own father’s ideas and unlike many politically correct but very TIMID and gutless media talking heads, articulates a point of view that resonates with many in Middle America.

As many of you know, I have made a living SOLELY from investing and off my opinion. Michelle is UNIQUE, because unlike most journalists, she possesses the two traits which are the keys to her success:  passion and the willingness to constantly learn more.

This sense of independence could possibly “hinder” her career as her values are in direct opposition of the many who are either left leaning or are too afraid to speak candidly.  MANY of us who share her passion and values realize she is one of the few voices espousing “real change”.  Michelle’s book does not contain specific investing advice but provides hope that journalists around the country can transform into passionate trustworthy intelligent candid reporters whose ultimate goal is improving America.

Like Ronald Reagan, Michelle initially gets attention by her good looks and charm. But like Reagan, her skills in speaking DIRECTLY to the American people, will invariably be the reason that both achieve success in communicating their vision.  The sky is the limit for Michelle and it is clear that she will undoubtedly achieve any goals or dreams she attempts in her lifetime.  She is certainly a rising star in this competitive business of financial journalism.

In closing, this book is written by someone with strong convictions and passion and hopefully, Jeff Immelt and some of his executives will read it and start understanding what the American people actually wants to hear.  Michelle is already well aware of it and is not afraid to say it.  Michelle you need to write Carlos Slim’s biography.  Her book is a “must read”.